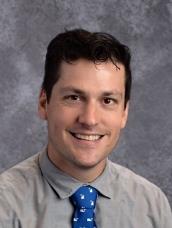 Mr. Gill graduated from Bates College with a Bachelor of Arts in Classical and Medieval Studies. He completed his Ph.D. at the University of California, San Diego in Theater and Dance, focusing on performance and military theory. Mr. Gill has taught both middle school and high school all across the country, starting in San Diego, CA. In a previous life, he was the head of a Theater Department, and has taught acting, directing, and playwriting. A native New Yorker, Mr. Gill loves the Yankees and will debate you all day any day. He actively plays rugby and will try to recruit you. Look for the Monomoy Rugby Sharks eventually. In his spare time, he enjoys hiking and adventuring, reading, and spending time with his family. He has two large dogs, and a cat.